World pistachio production could reach 828,557 tons in the current 2021/22 campaign, which would mean a 16% drop compared to that obtained in the previous campaign, when it reached 981,671 tons, according to a report from the Department of Agriculture of the United States (USDA). 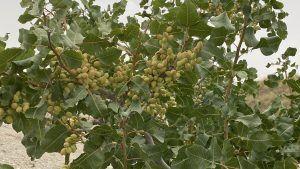 The decline is due to lower production in Iran and Turkey , which cancels out a new increase in the United States. As a result of these lower availabilities, consumption, exchanges and final stock will fall this season.

The United States, the world’s leading producer, will obtain a record volume of 523,000 tons , 10% more than in the previous campaign thanks to a combination of better yields and an increase in the productive area. This production will allow it to increase its exports by 25%, to a record figure of 290,000 tons, which will go mainly to China and the European Union.

Iran , the world’s second largest producer, will collect 135,000 tons, 29% less due to the impact of frost. This will affect its exports, which will fall considerably. As for Turkey, it will register a 65% decrease in its production, down to 87,000 tons, due to low yields as a result of the alternation of this crop. Unlike Iran, which exports practically all of its production, Turkey allocates it almost entirely for domestic consumption, so this decrease will not have an impact on world trade.

China, the world’s leading importer, will acquire 140,000 tons on the world market to cover its demand. The figure is 10% lower than that of the previous campaign.

Care, love and care are our ingredients

Shopping cart
close
Start typing to see products you are looking for.
We use cookies to improve your experience. If you continue browsing we assume that you accept the use of cookies. Políticas de cookies ACCEPT
Manage consent

This website uses cookies to improve your experience while you navigate through the website. Out of these, the cookies that are categorized as necessary are stored on your browser as they are essential for the working of basic functionalities of the website. We also use third-party cookies that help us analyze and understand how you use this website. These cookies will be stored in your browser only with your consent. You also have the option to opt-out of these cookies. But opting out of some of these cookies may affect your browsing experience.
SAVE & ACCEPT

Open Chat
¿Need help?
Pistachos Luna
Hello, how can we help you?